When I was writing my first thriller novel alone in the bedroom of my flat on a rainy September’s evening in 2018, I didn’t at the time vision it as a published novel in its complete form that it is today. Prior to typing the first sentence “Every time I close my eyes, I can see his face.” I knew the story I wanted to write about a mother missing her boy who had disappeared; but all the complexities of why he vanished, who done what, where he ended up, wasn’t pre-planned. Every time I wrote a chapter it took me in a different direction, and then I planned all the next steps along the way covering all the loose ends later on. It wasn’t until I found the publisher and editors for my novel, (then titled: Behind Closed Doors – a change from my original WIP: The Consequence), that Mummy’s Boy took its final shape with extra twists thanks to HERA Books. They titled it perfectly.

As lockdown is starting to ease, I will finally get to see my book on a book shelf in The Works stores who is selling it at the ridiculously cheap price of £2.00 in the U.K. If you do get out and about soon and happen to visit a store, I’d love you to tag me in a picture on Twitter (@JasonA1980) if you can.

Reviews! Mostly positive and it’s still rocking the 4/5 stars on Amazon, Goodreads, The Works online stores as at 04/04/21. I have seen most of the positive and the negative reviews. Book’s aren’t to everyone’s taste and while I hardly ever comment on the negative feedback, I can’t force anyone to like my writing style, but there are so many good comments it outweighs the bad in my view.

Mummy’s Boy, was first published in digital format on 1st April 2020, and then in paperback formats 19th November 2020. The audiobook version is due for release sometime in 2021, and I can’t wait to hear the story all over again in its new format this year. I’d love to see it as a two-part television drama one day, who knows what might happen in the future.

So what’s next? – Following Mummy’s Boy, I published digitally, You Let Him In with HERA Books in August 2020, and that too will be available in audiobook format later this year. I’ve not had any confirmation of You Let Him In, in paperback (yet), but hopefully soon. I self-published a short thriller novella, Glimmer of Hope, this isn’t long enough to be a full-length novel and a bit more risqué than what I would submit to a publisher. In addition to this, I have completed the first drafts of two more full-length thrillers and in the process of querying… here’s hoping they see a traditionally published released in the near future. I wrote both book’s during lockdown and I am having a writing break until I’ve had a well deserved holiday this year.

Thank you – and if you want to check out my novels on Amazon – this link will guide you. 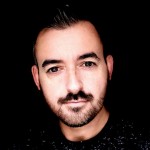